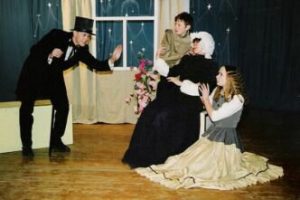 The Russian Children and Youth Theater “Žaliasis žibintas“ (eng. Green Lantern) – the member of Vilnius cultural center was established in 1992.

The founder and head of the theater – Zoja Radzivilova. In 1986, she graduated from the Academy of Drama of the Academy of Culture of St. Petersburg.

The main goal of the theater is the spiritual education of children and young people, aesthetic education, creative studying, revival and fostering of Russian and other cultural traditions, and the rapprochement of Lithuanian and Russian cultures.

During the years of its existence the theater created a number of cultural programs and projects: performances, various festivals, literary programs for children, adolescents and young people.

Over the entire period of the theater, more than 200 young people played in the theater. Many of them say it was one of the most beautiful experiences of youth. And some of them became professional actors and actors.