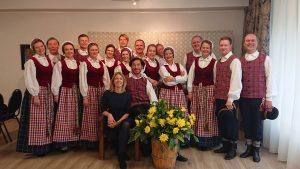 The Lithuanian folk dancing group „Dalužė“ was found on the 5th of December, 2015. Its name originated from Gytis Paškevičius song „Dalužė“ (meaning – fate).

The group cherishes traditions of folk dancing seeking to attract a broad audience of those who love folk dancing and arts. It consists of dancers of different ages who at one time danced in Vilnius University song and dance group, in folk dancing group „Vaiva“ as well as in other groups.

From the very beginning the group tries to participate in a growing number of concerts. In 2018 it took part in Ensembles’ Evening of Lithuania’s Centenary Song Celebration. Also the group has started preparing for the Dance Celebration in Philadelphia, the USA in 2020.

Even though the group exists only three years it has already won its first very important award. On the 17th of November, 2018 the group participated in the National Competition „Iš Aplinkui“ for senior dancers and received first degree diploma in the group of cities as well as became the most  artistic group.