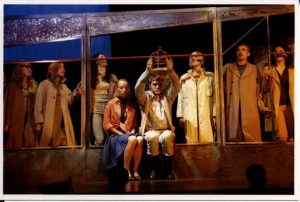 The Vilnius Polish Theater – a member of Vilnius cultural center was founded by actress and director I. Rymovich in 1963.

The headquarters of the theater are the Vilnius Railway Culture Chamber.

In 1965 the band presented the first premiere – A. Fedros’s comedy “Doms and Husky”.

During the 45 years of creative activity, the Vilnius Polish Theater presented over 50 premieres, played about 3000 performances of various genres, built according to the most famous pieces of Lithuanian, Polish and world classics. The group also collaborated with famous Lithuanian dramatists and stage designers: J. Gruša, K. Saja, V. Kalinauskas and others.

Vilnius Polish Theater is an active participant and winner of Lithuanian and Polish theater festivals. He also presented his performances to the audience of Latvia, Belarus, Ukraine, Estonia, Russia, Armenia and other countries.