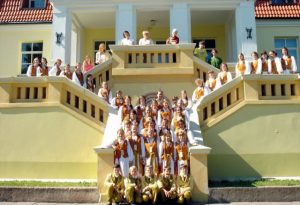 The Children choir of the Lithuanian National Radio and Television – a member of Vilnius cultural center was founded in 1979.

The choir was led by Arvydas Girdzijauskas. Since 1992, the director of the choir has become Regina Maleckaitė.

Most of the repertoire consists of works by contemporary Lithuanian composers specifically written for children’s choir. The collective also performs classical pieces of foreign composers and continues the tradition of Lithuanian Song Festival, which is protected by UNESCO.