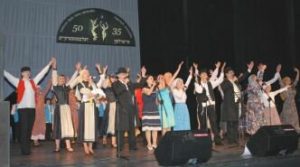 The Jewish song and dance ensemble – a member of Vilnius cultural center was founded by Jakov Magid in 1971.

In the beginning it was a vocal instrumental ensemble Fajerlech. After a year was formed the core of the enthusiastic musicians. The band joined the group of dancers and the first concert took a place.

Currently, the folklore ensemble is led by Larisa Vyšniauskienė.

The members of the collective are not only Jews but also Lithuanians, Russians, Poles, Ukrainians. It’s probably the only ensemble in Europe that popularizes the endangered Yiddish culture with music, songs, dances and the organization of major traditional holidays.

The ensemble has three dance groups: the youngest, junior (the leader is Yelizaveta Volynskaya), the chief (the leader is Arik Krupas). There are also vocal groups: children, youth and adults (directors Michail Jablonskij (Filipov)). Since 2011 the band has been re-established in the ensemble (director Ilja Rapoport).

Fajerlech’s concerts are characterized by integrity, naturalness, playfulness and scenic culture. They are not limited to Yiddish culture, because there are plenty of programs in the cultural traditions of Israel, Yemen, Morocco, Sefard, and other countries that are closely linked to Jewish history.

Fajerlech is actively performing not only in Lithuania, but also abroad. His concert program was introduced to the public in Finland, Russia, Georgia, Uzbekistan, Israel, Belgium, Sweden and other countries.