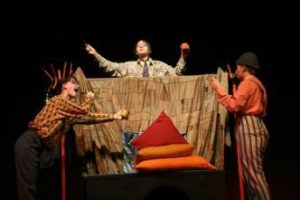 The Theater Studio „Elementorius“ (eng. Elementarium) – a member of Vilnius Cultural Center is the oldest theater studio in Lithuania, which celebrated its 50th anniversary in 2015.

In 1965, the Youth Theater started its work, and the theater actor Valerija Marcinkevičiūtė-Karalienė invited the first pupils to the theater in the same autumn.

Today the studio is attended by about 50 members. There are three groups:

All the guides once visited the studio themselves.

“Elementorius” focuses on the versatile creative human development, the study of individual elements of the theater, and the relentless pursuit of artistic results – to build performances. Theatrical performances occur as a result of self-learning as a mastering of further theatrical tasks.

The theater studio has its own traditions, celebrations, its own emblem, a hymn. The theater is celebrating christening, birthdays; evening performances by theater members, meetings with former members or conversations with interesting personalities.

„Elementorius“ has probably participated in all major republican festivals of children and youth, university theaters.

The studio has presented its performances at international theatrical festivals in Scotland, Holland, Sweden, Russia, Poland, Germany, Belarus and Belgium.